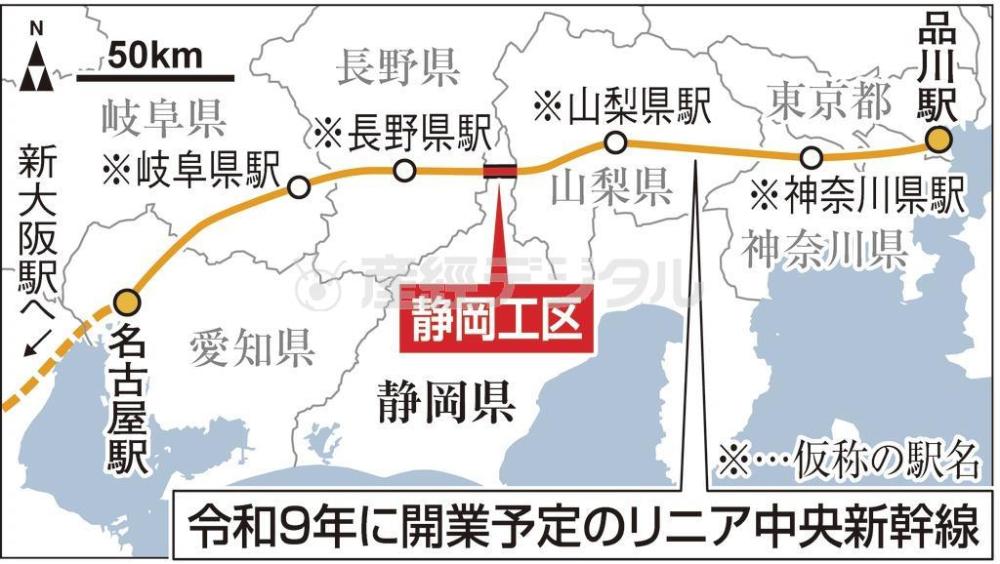 Section of maglev route, in red, that goes through Shizuoka

Right now there are much more serious matters on people’s minds than the maglev Chuo Shinkansen, or “linear motor car,” as it’s called in Japanese. Nevertheless, the train, which will spirit bodies from Tokyo to Nagoya in about 40 minutes, is set to become a major public works project that many in government and industry probably think could help revitalize the economy in the new post-pandemic “normal,” though no one has actually taken the time to publicly explain its role in such a brave new world. But one thing is for certain. It’s not going to be finished by its planned completion date in 2027. Actually, we never thought that was possible in the first place, but now it seems to be definite because the major media have said so.

Though there are actually a lot of reasons why the project won’t be completed on time, the only one the media is talking about is the governor of Shizuoka Prefecture’s refusal to allow construction to proceed on the 10-kilometer portion that passes through his bailiwick. Consequently, Heita Kawakatsu is the scapegoat for everyone who has a stake in the maglev. The governor of Aichi Prefecture, Hideaki Omura, is especially aggrieved, since the city of Nagoya is spending a great deal of money redeveloping the area surrounding the new maglev station. If it doesn’t open by 2027 everything will be screwed up fiscally. A think tank has estimated that the maglev will generate ¥2.3 trillion for Nagoya during the ten-year period after the station opens.

Kawakatsu’s gripe is about water, specifically the water supply for the 600,000 residents who live along the Oi River, which is 168 kilometers long. In 2013, JR Tokai, the company behind the project, carried out an environmental assessment that found construction of the tunnel through Shizuoka would result in a loss of ground water amounting to between 1.07 and 2.12 tons per second, equivalent to 17 percent of the river’s volume at any one time. END_OF_DOCUMENT_TOKEN_TO_BE_REPLACED