As construction proceeded we looked forward to observing the progress, so much so that we didn’t necessarily want it to be done that quickly. It was only going to happen once in our life so it seemed like something we should savor. Our apartment was only a 5-10 minute bike ride away from the property, so we could visit it every day and see what had been done, what small increment toward a full realization of our image had been accomplished since yesterday. By the same token, we knew we might be disappointed in the changes taking place, since we’d never done this before and so far weren’t convinced that there was a meeting of minds between us and A-1 as to the final results. Would we have the courage and wherewithal to rectify quickly something we weren’t happy with? Was the house’s fate already set in stone, its future manifestation irrevocable?

As it turns out it wasn’t quite that momentous. Though we had reluctantly gone along with the ritual of feting the carpentry crew to lunch and gifts, they didn’t show up every day, and never in the numbers initially reported. Sometimes nobody appeared for five straight days, and when someone did it was usually either the head carpenter or his main assistant, and rarely both. We knew from media reports that Japan is suffering a serious shortage of construction labor owing to various factors, not the least of which was the building rush to head off the consumption tax rise in April, but A-1 never admitted to that and when we timidly queried if the original completion date could be met at this pace young N hinted that it probably wouldn’t but still tried to avoid anything definite. At first we took his reticence as a way of avoiding the issue, but we soon came to realize that he actually didn’t know. As the architect he was nominally in charge of the building process, but he seemed to have no control over the activities of the people who were doing the actual building. If there was rain or strong winds, he had an excuse, but otherwise he didn’t explain these lacunae of absences, and we assumed it was because he couldn’t. It became something of a joke. After having scoffed at the whole custom of gifting the carpenty crew, we automatically bought snacks for the workers in that time-worn tradition whenever we went over to check on things only to discover no one there or only one person, who, as a result, could feast on a whole package of dango that was supposed to feed five. Eventually, we wised up and brought less and less to the worksite, until we arrived where we started and stopped bringing anything.

But that isn’t to say progress wasn’t being made, only that it wasn’t going ahead at anything that could be called a stready rate. Sometimes two weeks would pass without any visible changes, and then in the course of a day or two the whole place seemed transformed. It was almost surreal. Another factor that sometimes made it difficult to gauge how far along things were was that we didn’t have access to the house. For insurance purposes we probably shouldn’t have been allowed inside during construction, but in any case once the frame was finished the front door was the first thing installed, which meant the place was locked when there was no one there. We didn’t have a key. There was a box attached to the utility pole on the property with a combination lock, and we correctly assumed that the key to the front door was inside it, but young N didn’t give us the combination. Nevertheless, when either of the two main carpenters was working he would allow us inside to look around, and though our main excuse for snooping was to measure nooks and crannies so that we could start ordering those things that we declined to pay for through A-1, we simply just wanted to see what the place looked like. Once the walls were up we’d never see the insulation again, or the ceiling beams, or the space underneath the floors. This was going to be our home. We wanted to know as much about it as possible. Like any potential lover we wanted to see it naked. Sometimes the carpenter would explain a point of design to us, but everything was startlingly simple, a realization that prompted second thoughts. Should we have spent more money on the windows? Was this insulation really the best that money could buy? Should we have opted, at much greater expense, for a metal staircase rather than the wooden one that seemed bulkier-looking that we expected? Would we be able to get the refrigerator and the washing machine up the stairs to the second floor? 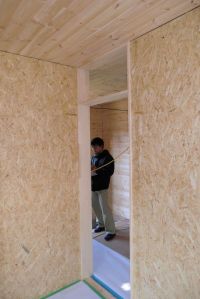 These second thoughts hit a peak when they finally put up the siding. A-1 had to hire a specialty company to do the job, and it took them three days. After they finished we inspected the results and at first were disappointed. When we had discussed siding at our first meeting with A-1 after deciding to build the house with them, we struggled with the choices. We didn’t want conventional compound siding, which tends to mimic natural materials like brick or wood and, thus, looks doubly fake. Real wood would have been preferable but besides being very expensive and not necessarily a wise choice (termites, fire, humidity), Chiba Prefecture had regulations that would have made a wood exterior even more expensive. For that matter, our first siding choice was enameled galvanium, but metal exteriors were also regulated in Chiba, meaning specially treated boards had to be affixed between the frame and the siding, thus making it cost more. At the time we were fretting about every additional cost and opted for regular compound siding but in the corrugated style of the galvanium kind–alternating dark gray and dark blue–which was cheaper and looked the same, at least from afar. What we didn’t know was that this kind of siding was attached with nails, and it looked cheap, at least when you walked up to it. Should we have ordered the galvanium, which, on second thought, wasn’t really that much more expensive? (When we voiced our concern about cost during that first meeting, the salesman, N, laughed derisively: “It’s not that expensive.”) It was the first thing about the house we felt was a mistake, though the feeling passed a week or so later when the siders completed the sealing of the  panels and spackled over the nail heads. You could still see them but they weren’t as prominent. 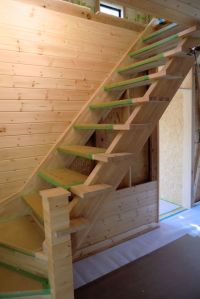 But those rare times we gained access were pretty thrilling, and it was because it wasn’t what we expected or imagined. The OSB we chose for the walls of the office and the walk-in closet went up before the rest of the walls did, and the crazed randomness of the pressed-wood fiber pattern was startling: Who had walls like that. We had been told we could easily paint over the OSB but the pattern was beautiful. And while at first we had worried that we got carried away with the windows, when we stood in the middle of the unfinished rooms and looked out at all that bamboo and, on the second floor, all that sky, we felt a thrill of accomplishment. It was OK to be extravagant with choices that didn’t have to do with money.

But many of the times  we visited we had to be content with peering in through the windows to see what had been done since the last time we visited. Often enough it seemed nothing had been done, but we stood there and looked and looked, climbing up on the scaffolding to make sure we didn’t miss a thing, as if we still couldn’t believe that the people who would be living in this place were us. 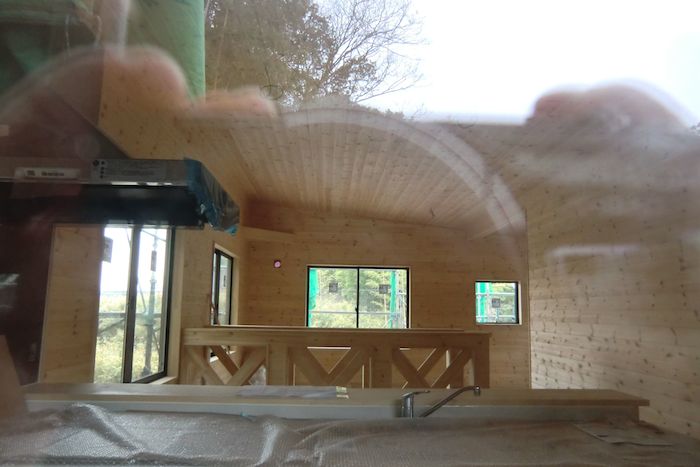 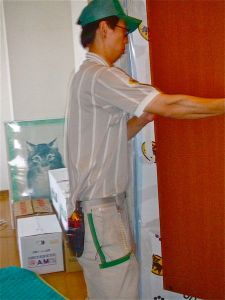 Here is this month’s Home Truths column, which is about moving house. Yesterday, we read in the newspaper an item that would have been suitable for the column but it was too late to include it. The Japan Trucking Association has issued a press release warning consumers that from mid-March to early April, moving companies are expecting a huge amount of demand–one-third of demand for the full year, in fact–and urges anyone who is thinking of moving during that time to put off the move until later. In our experience, people usually move house because they have to, and have to move during a certain period of time due to specific circumstances, such as a new job, new school year, or the availability of a rental or purchased residence.  In any case, March 3 seems way too late to make such a warning, but, then again, anyone who is planning to move during the period described and  hasn’t made arrangements yet probably deserves whatever difficulties arise when they finally do try to make arrangements. But in the end, you can always rent a truck and do it yourself, which we’ve done many times.