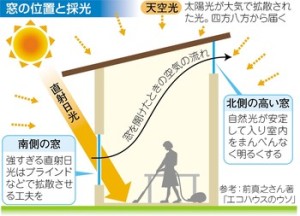 One of our main bugbears with used houses is the obsession with a southern exposure. Though we perfectly understand the rationale–Japan is in the northern hemisphere and thus a southern facade provides more natural heating in the wintertime–we can’t fathom the insistence of builders and designers that all rooms in a house will face south and all “utilities,” meaning bathrooms and kitchen, will be located on the north side of the structure. Given the normally small plots of land in Japan, this results in a kind of domino distribution: all houses in a development “face” south, which inevitably means facing the “north” side of your neighbor. When we’ve asked builders about orienting a house toward the west or even north in order to take advantage of some attractive natural feature of the land, we’re invariably met with consternation and concern. It’s entirely possible, they say, but inadvisable. Some things just aren’t done.

Our reasons for shunning southern exposures are mostly aesthetic, but a recent article in the Tokyo Shimbun suggests that maybe southern exposures are not economical or even healthy. The University of Tokyo Engineering Department built an experimental house on the roof of one of its buildings to study the effect of direct sunlight on interior environments. Like almost all modern Japanese housing, the part of the building facing south had large plate glass windows so as to allow more light in. On sunny winter days when the exterior temperature was 10 degrees C, the interior temperature was as much as 35 degrees C, which is actually bad for the people who live there. In essence, the large windows make it difficult to control the interior temperature, which means the home owner may actually use more energy. According to the professor in charge of the project, it depends on the type of glass that is used, but in most houses the windows allow visible and near infrared light to pass into the house, where it is reflected off of the floor in the form of far infrared light, warming the room. Far infrared light cannot pass back out the window and thus more heat is trapped in the room. Direct sunlight contains a great deal of energy. Moreover, at night, when temperatures drop even further and there is no sunlight, more heat escapes from the house because of these big windows. END_OF_DOCUMENT_TOKEN_TO_BE_REPLACED 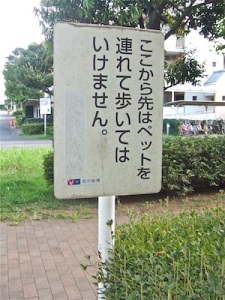 Here is this month’s Home Truths column in the Japan Times, about pets. Though we have two cats ourselves, and basically believe that anyone who has a pet should be able to live where they want, we’re not entirely comfortable with the increasingly open acceptance of pets in collective residences. As we suggest several times, it’s a two-way street. Tenants and condo owners who do not demonstrate sufficient understanding of what it means to have an animal companion should not have them, though we’re not sure how that point can be driven home in a way that doesn’t discriminate against people who do demonstrate responsibility and understanding. Is it right to keep large dogs in small apartments? Should all dog owners who live in collective housing be obliged to train their pets? Should cats be confined indoors or allowed to roam free, and if the latter is allowed, should they be required to be spayed/neutered? Rules are unavoidable, but education is essential. 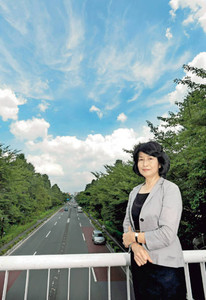 More than a decade ago, we were following the situation in Kunitachi, Tokyo. A developer, Meiwa Jisho, wanted to build an 18-story condominium in the city and was being opposed by locals. As is often the case with public contretemps that go to court, we lost the thread and our attention fixed on something else. The case was initially interesting because it seemed like a good and rare example of locals standing up to a developer in a concerted, effective fashion. It’s not unusual for residents to protest buildings going up in their midst, but normally such protests are so parochial in impact and fruitless in purpose–involving anything from protection of “right to sunlight” to keeping out “undesirable” elements, like single women working in the so-called water trade–that, by themselves, they offer little that would help us understand the housing situation. The Kunitachi affair was different, and while we were interested in it we thought the residents might actually have a chance to prevail.

The outcome turned out to be more complicated. A recent article in Tokyo Shimbun profiled 63-year-old Kimiko Uehara, the one-time mayor of Kunitachi who was instrumental in bringing the suit against Meiwa. She has been out of politics for years now but is still involved in the Meiwa affair, except that now she is the target of a lawsuit–prosecuted by her fellow Kunitachians. END_OF_DOCUMENT_TOKEN_TO_BE_REPLACED