Here is another draft chapter from our unpublished book about our house-hunting adventure. This one is about second homes and so-called resort mansions.

One late summer morning in 2012 we were on the Tokaido Shinkansen super express and ran into a friend we hadn’t seen in years. He asked us if we were still living in Tokyo and we said we had moved some time ago because of the earthquake. He then asked what we were doing on the bullet train and we said we were on our way to Atami on the Izu Peninsula to look at some properties we might be interested in buying. He gave us a funny look. “That would seem to be the worst place to live if you’re afraid of earthquakes.”

True. Just the day before Japan’s Cabinet Office Disaster Council had updated its projections for a major earthquake occurring in the Nankai Trough, the deep indentation in the sea bed off the Pacific coast, and Shizuoka Prefecture, which contains Izu, was deemed the worst location in terms of projected casualties, though, technically, most of those casualties would be in the western part of the prefecture, not Izu. In any case, we weren’t completely serious about buying a place there. Having been frustrated in our search for a home we could afford, we were entertaining the idea of keeping our rental and buying a cheap old fixer-upper in a location with cooler summers. If our income situation worsened and we had to give up renting, then we would at least have a roof over our heads, and if things continued as they had been then we’d have a weekend/summer place. There are plenty of old dumps in the highlands of Tochigi and Nagano, or in the wilds of Chiba that can be had for under ¥7 million, though they’d require another ¥3-5 million to make livable. And during our search we noticed there were quite a few such places in Izu, too, mainly besso (separate homes), which we had avoided so far. Second homes tend to be built in specially designated developments managed by companies that charge yearly fees. Also, besso are usually impractical for year-round living, but since we weren’t necessarily going to be living in one year-round we thought we’d see what was available. And Izu is, as they say, the “Riviera of Japan.” More to the point, it’s cooler in the summer.

END_OF_DOCUMENT_TOKEN_TO_BE_REPLACED 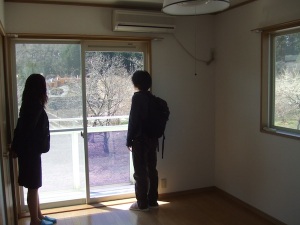 Room with a view, sort of

Last weekend we traveled up to Nikko to look at properties. Along the way, we could see the damage caused by the earthquake that hit southern Tochigi Prefecture the day before, mostly in the form of blue tarp hastily stretched across roofs where kawara tiles had broken loose. Kawara tends to be used in more traditional houses and is considered to have better weather-proofing and climate control properties than regular shingles. However, they are notoriously difficult to apply and easily come loose during earthquakes. Roofers throughout the Kanto and Tohoku regions are raking it in right now.

Nikko is one of Japan’s most historically significant places and a UNESCO World Heritage site. It was combined with several other neighboring towns and villages some years ago, and the area we visited is in the residential district to the south of the famous temples. In that regard, it isn’t significantly different from your average suburban residential area–meaning it’s cramped and nondescript–though the surrounding mountains and abundant pockets of wooded areas and terraced farmlands give it some character. The first place we visited, in fact, was in a development originally subdivided for besso (second homes). We got off at Tobu Shimo Goshiro station, which was small enough to not have a ticket wicket (we were on the honor system and only required to drop our tickets into an unattended box), and walked for 25 minutes through rolling hills and past the old cedar-lined Nikko Kaido to the subdivision, which didn’t really look like a subdivision when you approach it from the main road. Situated in a grove, it did look like a besso community, meaning the homes were varied in style, shape, and size. The property we were looking at was in the middle, next to a golf course, and the real estate agent from a Shinagawa-based company called Mount, who was going to show us all the properties, was already there getting the place ready for our inspection. END_OF_DOCUMENT_TOKEN_TO_BE_REPLACED