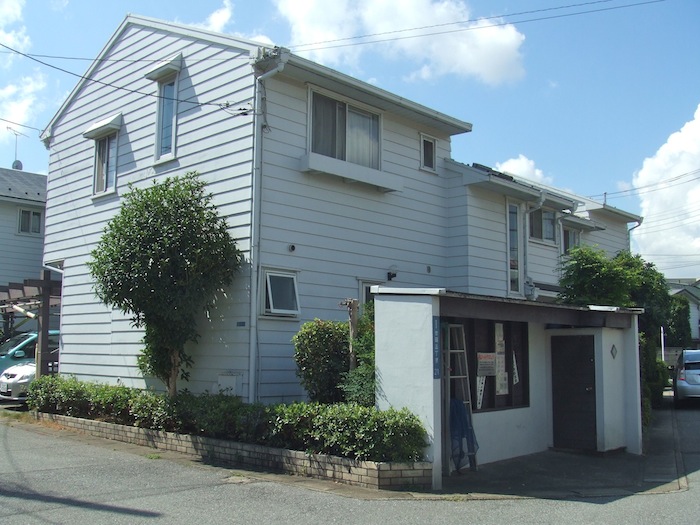 We’ve always been interested in town houses and are still thinking of dedicating a Japan Times column to them. Town houses were briefly popular in the late 70s and early 80s. Japan has always had an indigenous town house, called nagaya or machiya depending on which part of the country you’re in, but the structures called “town houses” in English (sometimes “terrace houses”) were more like their Western cognates: two-story structures with walls adjoining their neighbors. In urban environments town houses offer more effective utilization of land than normal detached houses while providing a similar level of creature comfort. However, once land prices skyrocketed in the mid-80s town houses were considered economically inefficient, even in the suburbs, which is where you normally found them anyway. Everybody started building condos with boxy floor plans in order to get as much cash out of a block of air as possible. Every so often we come across an old town house on sale and check it out, but because of their relative scarcity they tend to be overpriced. Of course, “overpriced” is all a matter of perception. Because town houses are relatively unusual, owners think that makes them more valuable, but they’re still old and always need a lot of work, as much as a detached house of the same vintage does if it hasn’t been renovated (and usually they haven’t been). A few weeks ago, as a matter of fact, we were amused to see a listing in which town houses were qualified as being “popular.” They aren’t, at least not in the general definition of the word. They are simply “rare,” which means it’s assumed some people will pay a bit more to have one. END_OF_DOCUMENT_TOKEN_TO_BE_REPLACED

Across and further down the Sumida River from our apartment is a large condominium complex that has intrigued us ever since we moved here. Legend has it that the late rocker Yutaka Ozaki had just moved into it when he was found not far away in an alleyway one night, dying. It’s a good legend, and like many legends it’s not true. At the time Ozaki was renting a much more commonplace sort of “mansion” in the same neighborhood. But it’s easy to understand why this particular complex has attracted that sort of speculation. Every so often somebody moves out and you see a flier in the mailbox advertising the unit, which tends to fetch a price comparable to new condos even though it was built in 1991. The layouts are more imaginative and seem more livable than those of most condos. Rather than cut a box into rectangles, the designers staggered the position of the rooms along corridors and shaped the building in such a way that every unit looks out on at least two views, meaning there’s more sunlight; or that’s the impression one gets looking at the layout and then at the building’s exterior.

Last week, we finally visited the complex after we saw a flier announcing that two adjacent units on the 14th floor were on sale: a 67-square-meter 2LDK for ¥28 million and a 94-square-meter 3LDK for ¥38 million. Though both of these prices were out of our league we wanted to see what was really there, and were quite shocked at what we found. END_OF_DOCUMENT_TOKEN_TO_BE_REPLACED