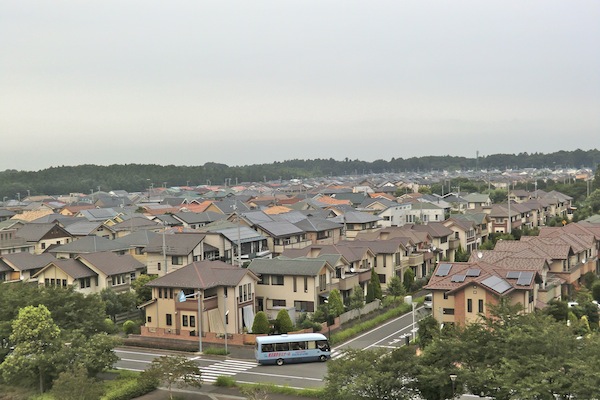 What we’re trying to avoid

We went to Tsukuba on a Friday, and the following Monday the woman from SBI Mortgage called and said we had cleared the preliminary screening. She had already given us a checklist of the documents we would need to submit for the final screening and so we started to collect them. It’s a time-consuming process because many documents are required and you have to go to different government offices to get them. The woman had already photocopied our drivers licenses, national health cards, and three years worth of tax returns. Now we had to get real proof of our worth, so to speak. The easiest to obtain was proof of residence (juminhyo) from the local city office. The checklist still had gaikokujin toroku shomeisho, meaning proof of an alien registration card, but the Foreign Ministry had phased out registration cards last year. We could also pick up inkan shomeisho, meaning proof of registered seals, at city hall. In bureaucracy-obsessed Japan, seals remain the looniest relic, since anyone could go to the store and buy one with another person’s name on it and use it in that person’s stead. Signatures are still not commonly used for purposes of witness and certification, though they’re obviously more individual. In order to somehow safeguard the seal as a means of certification you are supposed to register yours at your local government office, and then when called upon by a party with whom you are drawing up a contract you bring that party “proof” from the local government office that the seal you are using is kosher, though I have no idea how counterpart parties check this evidence unless they’re experts in wood-block printing.

A bit more difficult to secure was proof of our income for the last two years. The copies of our joint tax return were used for the preliminary screening but for the next phase they needed actual documents from both the national and local tax bureaus where we lived, which meant taking a trip to Narita as well as a trip into Tokyo, since we lived in Arakawa Ward for the first six months of 2011. In Narita we could also go to the local branch office of the Justice Ministry to obtain records on the land we were planning to buy–history of ownership as well as the official registered survey map of the plot, or, in our case, plots, since the land we were buying was actually two adjoining lots, one about 200 square meters and the other a mere 20 square meters. This smaller plot would prove to be a hassle, but more on that in a later post. On Tuesday we took a trip to Narita to get the documents we could. END_OF_DOCUMENT_TOKEN_TO_BE_REPLACED

Since the local branch of JA Bank is close to where we live, we decided to drop in and see what they could offer before setting out for Tsukuba and our rendezvous with SBI Mortgage. Though we had been virtually assured by N that SBI would lend us the money we needed, we wondered if we could get better terms at JA. Perhaps more significantly, we wanted to keep matters close to home. If we were going to borrow money we preferred it be from someone we could interact with whenever we needed to. We also liked the idea of doing business with people in our own community, especially now that we were thinking of planting roots in that community. SBI Mortgage, by virtue of its “money store” image, seemed more like a chain outlet.

The loan officer who met with us at JA was an efficient, overly friendly man in his late 30s. He listened patiently to our singular tale, a streamlined version of the one we related in our last post. When we pretended to be interested in Tama Home’s products two years ago we were honest about our income because we felt it was a good way of exiting the conversation after getting the information we sought, but the salesman had called our bluff (in a manner of speaking; there was no reason to think he didn’t believe we were sincere) by telling us that our budget was unrealistic, even though Tama Home did sell houses that were less than ¥10 million. As for our ¥2 million annual salary issue, he said it was not a problem, which is why he suggested JA Bank, and that’s why we were here.

Though we had brought along tax documents we weren’t quite expecting to make a formal application. We simply wanted to know what our chances were of getting a loan and what the terms would be if approved. To the JA loan officer it was pointless to explain what could happen; better to just apply and see how things turned out. In fact, he made copies of every document we had with us. He was careful to stress what we would eventually come to understand was the most important aspect of getting a home loan, which is that the lending institution needs to see what it was you were buying. They were not interested in hypotheticals. Ideally, we had thought that if you were going to borrow money, you should find out what the bank was willing to lend you, but that’s not how it works. You had to bring them something. It was as central to their decision as your income or credit history. END_OF_DOCUMENT_TOKEN_TO_BE_REPLACED