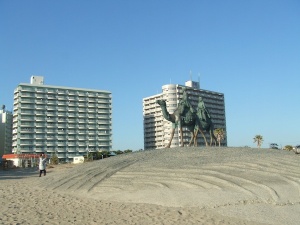 The TBS consumer news variety show Gatchiri Academy is usually pretty thorough about its advice, since it features a panel of economists and financial journalists whose opinions vary widely from one to the other. However, the other night, during a segment about resort condominiums, the information provided was maddeningly incomplete. As described here and here on this blog, resort condos are pretty cheap owing to the simple fact that too many were built and demand isn’t so hot any more. Gatchiri visited several vacation areas, including the Izu Peninsula and the Naeba ski resort in Niigata. The whole point of the segment was to jolt the audience with prices too low to believe. Actually, what was difficult to believe was that people paid so much for these cubbyholes when they were built twenty years ago. In one segment, a talent-reporter, in the company of a local real estate agent, inspected a 60-square meter condo in Izu that originally sold for about ¥25 million, and her jaw dropped when the realtor revealed how it now goes for less than 10. Mandibles literally hit the floor in Naeba, however: one and two-room condos for as low as ¥500,000?! Where do I sign?

That was the general vibe, anyway. What was infuriating was that nobody mentioned the real reason why these places were such bargains. For a split second, each property’s particulars were flashed on the screen, and these particulars may have included the yearly property tax fee you’d have to pay. But I didn’t see or hear any mention of the maintenance (kanri) or common repair (shuzen) fees that a resort condo owner has to pay every month. So when one of the financial writers commented that at such low prices it didn’t really matter whether or not the property continued losing value (which is most certainly would), he was, purposely or not, deceiving viewers who might be considering dropping a mill or two for a nice getaway. Maintenance fees normally run between ¥10,000 and ¥50,000 a month, and repair fees about half that, so the cost of keeping a resort condo could conceivably end up outstripping the value of the property after a few years. That’s fine if you plan to use it often, but the main reason these places are so cheap is that the majority of people don’t have that much free time, something that they realize too late. The financial writer also hinted that, with prices this low, you could just abandon the property without much trouble; but that’s a lie. You still have to pay the fees and the taxes, forever.

Go here to get a better idea of what’s available.

It’s tempting to wonder what Akabanedai would have turned into had various government bodies not decided to turn it into an almost exclusive zone for danchi, meaning public housing complexes, back in the 1960s. It was the first major danchi complex within the 23 wards of Tokyo, located on a hill that steeply overlooks Akabane Station in Kita-ku, not far from the Saitama border, and it was considered cutting edge by danchi standards when it opened in 1962, on a par with Matsudo. When I lived near Ukima-Funado Station on the Saikyo Line during the latter half of the 90s, I often walked to Akabane Station, which meant climbing the hill from the north side and walking through the danchi, which was huge, a veritable mini-state with its own complement of retailers that, at the time, appeared to languish in a commerical funk. Akabane, which teemed with restaurants and funky little drinking establishments; a large and well-used Ito-Yokado; and even a fair-sized bawdy district with Philippine hostess clubs and “cabarets,” was just a few minutes away, down a steep flight of steps at the edge of the tunnel that ran below the housing complex. Though the danchi was still the home to thousands of families, the dissipated atmosphere characterized by the sad retail component gave it a cast of desperation. I don’t remember ever seeing anyone patronizing these establishments.

But had it not been developed as a danchi, Akabanedai might have attracted a richer sort of homeowner. (It was a factory district on nationally controlled land before the danchi was built) There are lots of trees and vegetation up there and a fairly extensive park system; and the view, when it isn’t blocked by another public apartment building, can be breathtaking. END_OF_DOCUMENT_TOKEN_TO_BE_REPLACED 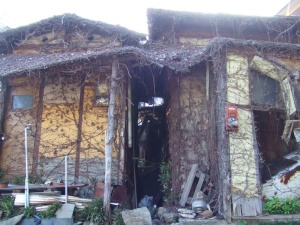 Last night NHK’s documentary series A to Z covered the phenomenon of abandoned houses. Based on local government statistics, it’s assumed that there are 100,400 unoccupied houses in Tokyo alone, a 40 percent increase since 1998. The number of abandoned homes in Tokyo increases at a rate of about 3,000 a year. NHK limited its coverage to the mostly residential areas of Setagaya and Suginami Wards, finding “at least” 500 houses that looked to be abandoned, of which they isolated 103 for more detailed study.

Study in this case meant talking to neighbors and local officials about the state of these homes, most of which were in severe states of disrepair, as well as finding out who the owners were and why they weren’t living there or keeping the properites up. Understandably, neighbors were quite concerned, not just with the eyesore aspects–some properties were magnets for refuse and overgrown with weeds and vines–but because they were fire hazards. Abandoned homes are often the targets of arsonists.

Ward officials receive complaints from neighbors about abandoned homes on a daily basis, but legally there is little they can do. It’s a Catch-22 situation: They need permission from the owner of a property before they can set foot on it, and in most cases they cannot locate the owner. In some instances, the owner has died and no heirs can be found; or, as in the case of one woman, a painter who died several years ago, her son was eventually located by NHK and said he had had “no connection” with his mother for many years. One owner of a house in Adachi Ward died with a lot of debt, so it’s assumed that his relatives have not come forward to claim the property because they are afraid they will have to assume that debt along with the property.

However, in some cases the neglect is on purpose. Officials know of some cases where the title of a property was taken over by a relative after the death of the owner or was sold to a third party. These new owners are simply waiting for the value of the plots to increase so that they can sell them for profit, but in the meantime they aren’t maintaining the properties. Of course, the houses in almost all these cases are worth zero, but in any of the 23 wards of Tokyo the land on which they stand could be quite valuable. One property in Setagaya that NHK checked was worth ¥200 million, but no one has seen the owner in at least ten years.

The Democratic Party of Japan has disappointed many of its supporters since coming to power a year-and-a-half ago. Some of the party’s most progressive proposals have either been shelved or abandoned. One of the less discussed promises has to do with chukai tesuryo, or “intermediary fees” that are charged by realtors when they broker a sale of a house by the owner.

In its INDEX 2009 statement of policy, the DPJ pledged to move away from home ownership as the primary housing policy goal and boost rights for renters, whom previous Liberal Democratic Party governments all but ignored. In addition, the DPJ said it would limit realtors to charging intermediary fees to only one of the parties in a housing sale. According to the law, when a previously occupied home is sold, the realtor can charge a fee equal to no more than 3 percent of the price of the house + ¥60,000 + consumption tax. For a ¥25 million house or condo, the fee would be ¥855,000. What bothered the DPJ is that the realtor can charge this fee to both the seller and the buyer, meaning for that ¥25 million home it can clear a cool ¥1,710,000. The party pledged to make it a law that the realtor can only charge this fee to one or the other party but not both. (Note: there are no fees when the realtor itself is selling a house or when the house is new and being sold by a developer.)

As with the pledge to support renters, the promise to control fees remains in limbo, and it’s not clear what exactly the DPJ hopes to bring about by limiting the fee to one party in a home sale. For sure, the extraneous fees that come with buying a home can be intimidating: title registration, bank fees for loans, loan insurance. In the end, a buyer pays anywhere between 5 and 10 percent of the price of the property in fees. In any case, no realtor charges less than the 3 percent ceiling, which means that the whole industry acts like a cartel. There’s no competition, though theoretically there could be. Most properties list with multiple real estate companies, so it’s possible a prospective buyer could play one against the other: Give me a deal on the tesuryo and I’ll work with you instead of the other guy.

Many municipalities in Japan have local natural history museums, and the one in Matsudo, a Chiba Prefecture bedroom community about 45 minutes by train from central Tokyo, is typical even if its summary explanation of purpose may sound inadvertently funny: “From the birth of humanity to the Tokiwadai housing complex.” It’s the juxtaposition of the epic with the plebeian, but the exhibit itself, which does exactly what it claims to do, provided a thorough encapsulation of socioeconomic development in Japan from the standpoint of what can only be described as “the average person.”

As with all natural history museums, Matsudo’s traces the area’s geological makeup and how its proximity to the river that flowed from the north into what is now Tokyo Bay, which shifted greatly over time, determined its economy. However, with no natural resources or development of special technologies that could take root and turn into ongoing regional industries (salt processing and pear growing were successful endeavors, but only for short, isolated periods), Matsudo’s most salient feature was and still is its topography: valleys called “yatsu” etched between plateus called “dai” and lowlands that straddled rivers called “shitaya.” Each was distinct geographically (dai were at least 30 meters above sea level, yatsu 10 meters, and shitaya 2 to 5 meters) and economically. Rice farmers lived in the shitaya, which often flooded during the typhoon season. The houses and, especially, grain storage facilities were built on man-made elevations to keep them dry. They were also built close to one another and in columns that stretched north to south, with the entrances facing south, often in “terrace” formations. The direction was important because the often destructive winds that would seasonally race through the lowlands came from the north and the west. This might explain the Japanese obsession with positioning housing is a southward orientation, regardless of the view such positioning provides. END_OF_DOCUMENT_TOKEN_TO_BE_REPLACED

On the morning of Dec. 16, the famous Otako takoyaki (octopus dumplings) stand in Osaka’s thriving Dotonbori district finally pulled up stakes under pressure from municipal authorities, who were set on removing the stand later that day. The stand had been doing business at that particular location since 1972 and was a certifiable if not necessarilly certified local landmark since it was actually featured in an official tourist brochure for Osaka. However, Otako has always been squatting; that is, using public property without permission. And it might have gone on using the small patch of concrete near the entrance to Tazaimon Bridge in perpetuity if it hadn’t tried to take advantage of an obscure legal principle. END_OF_DOCUMENT_TOKEN_TO_BE_REPLACED