Statistics recently released by the Health, Labor and Welfare Ministry show that the number of single parents is on the increase, and has been since 2006. This makes sense since the divorce rate is also rising, but what’s makes the statistics noteworthy is that more and more single mothers are women who have either never been married or were married but gave birth after their marriage ended.

Right now, the ministry estimates there are about 1,520,000 households in Japan headed by single monthers, and about 200,000 headed by single fathers. Though the statistics are a bit old, the Ministry of Internal Affairs conducted surveys of “never-married” single mothers in 2000 and 2005, and between those two years the number of single mothers between the ages of 15 and 49 increased by 39 percent. However, when you break this number down by age groups, you find that the biggest increases are among women over 30: 57 percent for 30-34; 45 percent for 35-39; and 56 percent for 40-44. In terms of real numbers these increases don’t represent very much since the portion of children born out of wedlock in Japan is only about 1 percent. END_OF_DOCUMENT_TOKEN_TO_BE_REPLACED

In 1987, at the height of the so-called bubble era, when land and stock prices were on a bender, the Diet passed the Law for the Development of Comprehensive Resort Areas, whose idea was to make the development of leisure facilities a national project. Developers and local governments were given financial incentives, and property laws were relaxed so that more holiday-oriented projects could be carried out. One of the outcomes of the law was the invention of the “resort mansion,” condominium complexes that were built in outlying areas where city folk could spend their vacations. END_OF_DOCUMENT_TOKEN_TO_BE_REPLACED

According to the land ministry, in 2009 60,000 properties were put on the auction block due to failure to meet mortgage payments. That’s a 30 percent increase over the number of auctions in 2008. Meanwhile, 800,000 new homes, including condos, were built in 2009.

The Asahi Shimbun yesterday ran a story about two such delinquencies that happened to neighbors in a town in Chiba. Both of the houses involved were built in 2001 in a small, cramped development of six buildings about 10 minutes walk from the nearest train station, which the article declines to identify. Three of the houses have changed ownership since they were first sold.

One of them is a two-story, 130-square-meter house that still looks relatively new. It was originally bought by a dump truck driver, who is now 61, for ¥22 million, which is a fairly reasonable price for a house that size which is 90 minutes from the center of Tokyo. END_OF_DOCUMENT_TOKEN_TO_BE_REPLACED 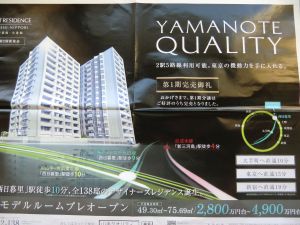 Think you can afford it now?

For the first time in seven years the long-term interest rate in Japan dropped below 1 percent, which should be good news for people in the housing and construction business, not to mention potential homeowners. The reason is less encouraging. Because the US economy continues to be sluggish, more people are purchasing Japanese government bonds and yen.

Consequently, the government will reduce the interest rate for Flat 35 housing loans starting in August, which are government-supported mortgages for between 21 and 35 years. Depending on how many years your mortgage is for, the interest rate will be from 2.3 to 3.2 percent, which compares to about 4.6 percent in the U.S. right now.

Though this development will certainly spur home purchases, it would be better if savings interest rates weren’t so low and salaries were rising. As it is, a lot of people just don’t have enough faith in the future to sink everything they have into a house or condominium.