The newspapers were all over this. Three bodies were found in an apartment in Kawasaki yesterday. All had been stabbed to death. A tenant in the apartment building admitted to carrying out the killings. The victims were the landlord, the landlord’s brother, and the brother’s wife. The suspect had lived in the building for five years and had a reputation for drinking and not always being on time with the rent. END_OF_DOCUMENT_TOKEN_TO_BE_REPLACED

Japan’s Real Estate Finance Research Laboratory just released its latest batch of figures for condo starts in Japan. As of the end of March, 463 high-rise condominium buildings are under construction throughout the country. That means buildings of at least 20 stories. These buildings comprise 143,826 units. Of these, 153 will be completed before the end of 2009. END_OF_DOCUMENT_TOKEN_TO_BE_REPLACED

Two days ago there was a huge fire in Yayoi-cho, Itabashi ward in western Tokyo. A large wooden yashiki (mansion, literally) burned to the ground. Two bodies were found on the premises, presumably belonging to the 74-year-old owner of the house and his 69-year-old wife. Though the bodies were burnt beyond recognition, police determined that both had been stabbed. They also found some 10,000-yen notes scattered about. The house stood on 3,000 square meters of land, which is huge for Tokyo, and the owner is one of the biggest landlords in that part of town. END_OF_DOCUMENT_TOKEN_TO_BE_REPLACED

At present the tallest structure in Japan is Tokyo Tower. In Dec. 2011, a new broadcast tower, the Tokyo Sky Tree, will be completed near Oshiage station in Sumida Ward, thus becoming the tallest structure in Japan at 610 meters. Sumida Ward is the heart is “shitamachi,” the old working class residential district of Tokyo. Though much of eastern Tokyo was destroyed by firebombing raids during World War II, this particular area was spared, so it retains the cramped, maze-like character that makes shitamachi unique. Families have lived here for generations in very tight-knit communities, in mostly old wooden structures called “nagaya,” which literally means “long house.” The streets are so narrow in this part of town that they can’t even be called alleys, and if there’s a fire (and there often is), forget it. No fire trucks can get through. These neighborhoods predate anything approaching city planning, but because of the Sky Tree, a lot of people had to be talked into moving or selling their land. END_OF_DOCUMENT_TOKEN_TO_BE_REPLACED

I live in a tall, publicly managed apartment building, and when I provide my address on forms or recite it over the phone I leave off the name of the building, because it’s long and unnecessary. However, some forms and interlocutors insist on building names, and in the case of verbal communication it can be a real pain–all those distinct katakana syllables standing in for Western words. The thing is, this naming insanity is getting worse and worse. END_OF_DOCUMENT_TOKEN_TO_BE_REPLACED

The other day, during a relatively lighthearted discussion on NHK about a heavy subject–the economic prospects for the current generation of 35-year-olds–a statistic dropped like a bomb. According to some government survey, 82% of all 35 year-olds in Japan makes ¥2 miiion or less a year. This number was cited in relation to marriage prospects, since most women these days are becoming more practical-minded about marriage partners. However, the government, not to mention the housing industry, should be very, very scared by this statistic. END_OF_DOCUMENT_TOKEN_TO_BE_REPLACED 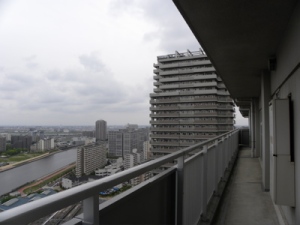 Today is Children’s Day, a national holiday in Japan. To mark the occasion, the health and welfare ministry always releases statistics about the state of the country’s birthrate, which continues to be dire. As of Apr. 1, there were 17 million Japanese between the ages of 1 and 14 years, accounting for 13.4% of the total population. That is the lowest rate in the world for any country with a population of at least 30 million. One of the prime reasons Japanese people are not having children is the country’s housing situation, though it’s considered merely one of many reasons (women’s “position” in society tends to get the most notice). Japanese housing policies since the war have been intrinsically bad for kids, creating residences and neighborhoods that are expensive, cramped, and, most of all, dangerous in ways that you might not expect. END_OF_DOCUMENT_TOKEN_TO_BE_REPLACED

The atomization of society has inevitably led to more and more elderly people living alone and, consequently, dying alone, too. In 2006 in Tokyo, 357 old people died in public housing units without anyone knowing until days or even weeks after they passed. One of the biggest “danchi” (apartment house complexes) in Tokyo is the Toyama Danchi, located about 10 minutes from Takadanobaba station in the center of the city. This particular complex is for low-income people, which means a fair number of older people live there. At present, almost 52% of the residents are over 65. This is not accidental, however. It has been very carefully planned. END_OF_DOCUMENT_TOKEN_TO_BE_REPLACED