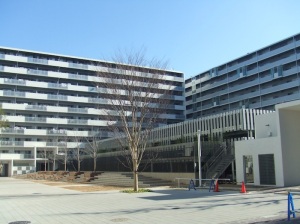 It’s tempting to wonder what Akabanedai would have turned into had various government bodies not decided to turn it into an almost exclusive zone for danchi, meaning public housing complexes, back in the 1960s. It was the first major danchi complex within the 23 wards of Tokyo, located on a hill that steeply overlooks Akabane Station in Kita-ku, not far from the Saitama border, and it was considered cutting edge by danchi standards when it opened in 1962, on a par with Matsudo. When I lived near Ukima-Funado Station on the Saikyo Line during the latter half of the 90s, I often walked to Akabane Station, which meant climbing the hill from the north side and walking through the danchi, which was huge, a veritable mini-state with its own complement of retailers that, at the time, appeared to languish in a commerical funk. Akabane, which teemed with restaurants and funky little drinking establishments; a large and well-used Ito-Yokado; and even a fair-sized bawdy district with Philippine hostess clubs and “cabarets,” was just a few minutes away, down a steep flight of steps at the edge of the tunnel that ran below the housing complex. Though the danchi was still the home to thousands of families, the dissipated atmosphere characterized by the sad retail component gave it a cast of desperation. I don’t remember ever seeing anyone patronizing these establishments.

But had it not been developed as a danchi, Akabanedai might have attracted a richer sort of homeowner. (It was a factory district on nationally controlled land before the danchi was built) There are lots of trees and vegetation up there and a fairly extensive park system; and the view, when it isn’t blocked by another public apartment building, can be breathtaking. 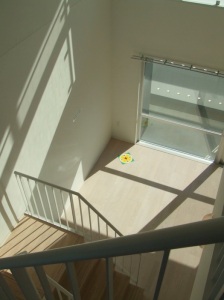 UR, the semi-private national public housing corporation, has been reconstructing some of the Akabanedai danchi for several years now and offering new rental apartments in a staggered series of offerings. On Jan. 22 they started the second wave of apartment inspections, which will last only until Jan. 30. Altogether, five apartment blocks, affixed with the romantic moniker Nouvelle Akabanedai, were rebuilt comprising 942 units, though only 191 are available to the general public, the remaining already being occupied by the tenants who lived in the danchi that formerly sat on that piece of land. We dropped by to see the merchandise and were struck first by the layout of the buildings, which were arranged in two courtyard formations: lines of apartments enclosing two central squares that were taken up by parking garages. For the apartments on the south sides, there was no problem, since they looked out on greater Tokyo–Mount Fuji to the right, Shinjuku and Ikebukuro straight ahead, and even Tokyo Sky Tree looming far in the distance to the left. But all the other blocks basically faced one another and the parking lots owing to that undeniable Japanese penchant for situating housing with a southern–or as close to southern as possible–orientation. It seemed particularly unfortunate for the apartments on the eastern border of the complex, which commanded a beautiful view of Tokyo and even Chiba in the distance; or the ones bordering the north, which looked out on Saitama. However, it was the entrances of these apartments that looked out on these views, not the living rooms, which faced the parking lots. 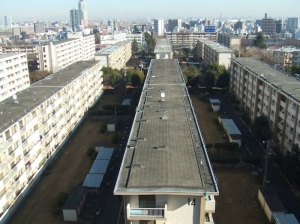 As usual, our initial wonderment at the surplus of vanguard mod-cons and greater supply of storage space eventually gave way to perplexity at the way rooms were arranged and light was directed. UR is rightly considered way ahead of completely private developers operating in the same price range when it comes to design. The company brings in various architects to provide a mix of layouts, and more than any other UR complex we’ve visited in the past ten years there was more variety on display in Akabanedai, including two-story “maisonettes,” two-family setups with separate entrances and kitchens, lofts that freed up more living and dining room area. But of the forty-some apartments we inspected, there were only two or three I would have wanted to actually live in, and two of them were out of our price range. The other one, like the one we presently live in, was an anomaly: Situated on the northeast corner of the easternmost block, it had an unblocked view in two directions outside the complex, and the two bedrooms and one “service room” extended off a hallway, meaning they were clearly separate from the living-dining area. To the kind of sensibility that usually designs public housing hallways tend to be a waste of space, but that means all the rooms are basically cut out of the same rectangle, giving them that boxy, kamaboko quality. For me, corner apartments are the only ones worth considering in Japanese buildings, not only because you usually get windows looking in two directions, but because it’s more difficult for an architect to adhere to the developer’s mandate to get as many units as possible out of a given volume of three-dimensional space. The irony is that this particular unit, though large (80 square meters) was also fairly cheap because it faced primarily north. 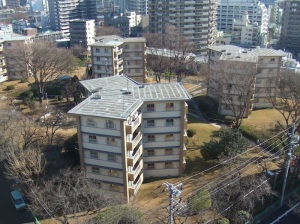 It will be interesting to see if the apartments that are available are taken. From what I saw, most of the other families inspecting the goods were impressed but there weren’t than many actually filling out applications. Public apartments in Tokyo have a reputation for being very popular because renters don’t need guarantors, “gift” money, or contract renewal fees; and generally they are of good quality and are reasonably priced. But except for the really cheap units and the really expensive ones, those that aren’t in central Tokyo or on the waterfront have been difficult to fill lately, from what I understand. I also think some people were intimidated by the almost institutional feeling of the place: the complex itself had a sterile atmosphere that didn’t lend itself to the kind of “community” vibe that the old danchi gave off. And when you get into the 3LDK range of apartments, which run between ¥180,000 and ¥200,000, most middle class families will just as soon buy a condo if they’re going to make those kind of monthly payments. That may explain why we saw more than the usual number of male UR executives on hand. Normally, UR brings in their trusty staff of middle aged full-time female employees to these inspections for some overtime work, but we’ve found them less than helpful. Twice during our inspection of Akabanedai we asked one of these women a question and suddenly a guy in a suit materialized out of nowhere to answer it. There was definitely a palpable atmosphere of selling going on. There are still a lot of buildings in the Akabanedai complex scheduled for rebuilding, which points to a huge investment for UR. I hope they at least lay off the vintage “star” apartments, which not only have historical value but also look like nice places to live. Too bad they weren’t available for inspection, too. 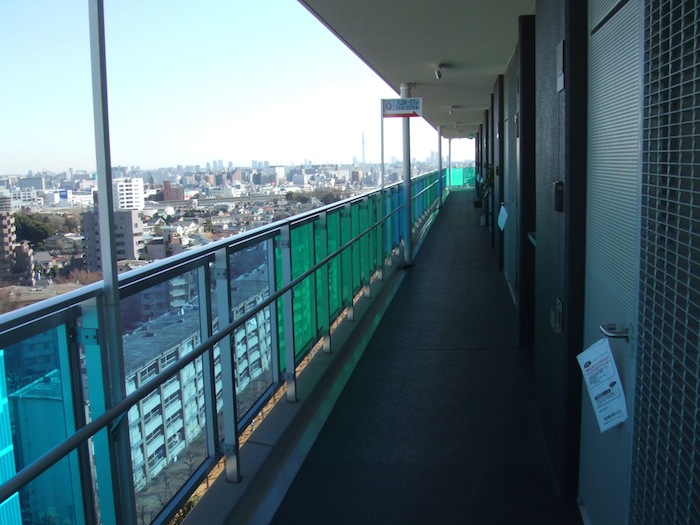