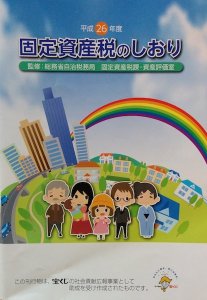 Pamphlet from local government explaining how property is assessed

We’ve written about Japanese property taxes a few times and in our JT column we once mentioned that the system for assessing property values and calculating the amount owed is complicated. Consequently, local governments, who do all this work based on laws implemented at the national level, sometimes make mistakes.

Apparently, the problem is even more widespread than we thought. According to a survey conducted by the Ministry of Internal Affairs, between 2009 and 2011, 97 percent of local governments reported at least one case of overcharging for property taxes, though, of course, that would indicate there are probably many more cases. A recent issue of the tabloid-style weekly Friday interviewed an official from a support network for “asset preservation” who pointed out that property taxes are very different from income taxes in that they are completely determined by the authorities. With income taxes, at least the taxpayer can see how his taxes are calculated since he has the documents with all the pertinent information. But property taxes are determined by the local tax office and the property owner simply receives a bill every year saying how much he owes without any explanation of how the bill was calculated, and unless the taxpayer has knowledge about the property tax laws and how they may apply to his particular circumstances, he won’t know whether or not the amount charged might be wrong.

The extent of the problem was illustrated in a feature in the Oct. 5 Asahi Shimbun, which cited a number of recent high-profile cases. Last May, the owners of apartments in a complex in Isehara, Kanagawa Prefecture, found out that they have been paying too much property tax for their units since the complex was built in 1972 by the then national housing corporation. Condominium values are assessed according to floor area, and almost all of the 600 units in the complex are about 63 square meters, but they also have verandas. The city tax office was including the verandas, which are about 8 square meters, into the assessment, but verandas are considered kyoyo, or common property, meaning they don’t belong to individual owners, but rather to all the owners, just like corridors and building foyers. The assessment for common property in a condo is divided up among all the owners but taxed at a much lower rate than property that is owned individually.

As a result, the city determined that it would refund the overcharged amounts, but only retroactive to 1986, since they no longer have the tax records for previous years. Of course, many of the units are no longer owned by the people who bought them when they were built, and some may have changed hands several times in the last 43 years, so the repayment situation is very complicated. As it stands, each person who receives repayment will get on average about ¥250,000. It should be noted that the market price for a unit in the complex is now a little less than ¥4 million.

Another case in Kanagawa involves a 70-year-old man in Yokohama who owns a rental apartment building. It turns out he’s been overpaying the property taxes for an adjacent parking lot he owns that is reserved for tenants of the apartment building. In line with a special deduction implemented by the central government many years ago, the owner of residential land that has a residence on it gets a five-sixths exemption on the assessed tax amount, meaning after the tax is calculated, he pays only one-sixth of the calculated amount. However, the local tax office did not apply this exemption to the land that contained the parking lot, even though they were supposed to. The owner was thus paying 100 percent of the calculated tax amount when he was only required to pay about 16.5 percent. But even though he has overpaid for 20 years, he only received a refund for the last five due to local laws. He will only receive ¥2.5 million. In this case, the mistake was uncovered when he changed CPAs. The new one had a much more complete grasp of property tax law and immediately felt his tax bill was too high. He told the owner to demand a breakdown in writing of his property assessment and the resulting calculation.

This same failure to apply the one-sixth law was behind an announcement from the local government of Tsukuba Mirai, Ibaraki Prefecture, in January. The city discovered it had overcharged 123 households for resdiential property taxes. The refunds went back ten years and amounted to a total of ¥73 million. In addition, the city also had to give some of these people refunds for their national health insurance, since property value assessment are also incorporated into the assessment of health insurance premiums. Fifty-five people received health insurance refunds amounting to ¥4 million. The mistake in this instance was traced to a lack of communication between the land division, which assesses property taxes for land, and the asset division, which assesses property taxes for structures. In many cases, the asset division neglected to tell the land division that a particular piece of residential land actually had a house on it, thus reducing the tax on that land by five-sixths.

In March, Honjo, Saitama Prefecture, found it had mischarged 1,342 property owners. In this case, about a fourth were actually charged too little. The reason for the mistake was that in 2006 Honjo absorbed the neighboring town of Kodama, and Kodama’s local government didn’t understand the tax laws very well and was assessing the properties incorrectly. It took a number of years for Honjo to figure this out.

All of these cases indicate how important it is for local governments to employ people who are knowledgeable about tax law. A big problem with bureaucracy on the local level is that civil servants are regularly rotated in their positions, just as managers are in Japanese companies, and so they never develop any expertise in a particular area. Many experts say that the property tax laws are way too complicated as it is. In assessing the value of a structure, the assessor must take into consideration the type of building materials and method of construction, which requires some knowledge of architecture and design. When assessing the value of land, the shape of the plot and its proximity to main roads and public facilities must be taken into account. Consequently, there has arisen a new kind of business: architects and real estate professionals who inspect properties for their owners to find out if they are paying too much in taxes. In most cases, the high fees the owner pays to the consultant more than compensated by the amount of money in refunds he receives from the local government.

In most of the above-mentioned cases, the money that property owners overpaid didn’t really amount to more than ¥20,000 or ¥30,000 a year, but there is at least one recent case where mistakes made by the local tax office resulted in couple losing their home. This elderly couple, the Onos, lived in Niiza, a bedroom community in Saitama Prefecture. The Onos were overcharged for property taxes for 27 years. Though they paid off the mortgage on their house, Mrs. Ono, who handled the bills for the household, stopped paying the property tax bill some years ago because they couldn’t afford it. (Mr. Ono is self-employed) The unpaid bills accumulated over the years, as did penalties and attached interest, and eventually the local government seized the Onos’ home and sold it at auction to a real estate company. It was the realtor, in fact, who found out that Niiza had overcharged the couple all those years, but by then it was too late for them to get their house back. They had to settle for a refund of only ¥2.4 million. Apparently, the city had neglected to notice that the Onos’ land was less than 200 square meters. The tax on that size of a plot is half that of a plot of over 200 square meters, so for 27 years the Onos were overcharged between two and three times as much for their land as they should have paid.

The only bright spot in this very sad story is that the resulting bad press prompted Niiza to look into all its property assessments, the outcome of which is that it discovered more than 3,000 instances of overcharging property taxes. Cold comfort for the Onos, though.

addendum, Oct. 19: The arbitrary nature of property tax assessment is perfectly illustrated in a long article that appeared in the Asahi Shimbun this morning. The paper reports that the owner of a pachinko parlor in Ashibetsu, Hokkaido, which went out of business ten years ago, is still paying ¥760,000 a year in property taxes even though the parlor is not being used. The land value “for tax purposes” is assessed at only ¥1.5 million, but the building’s value is assessed at ¥42 million, even though it has zero market value. Apparently, a local resident wants to buy the land but can’t afford the ¥10 million to tear down the structure that stands on it. The owner is willing to only take ¥1.5 million because he knows the building isn’t worth anything. When the reporter asked the local government representative how it can make such a high assessment of a building that is worth nothing, the representative said, “We don’t care if the building is being used or not.” Ashibetsu derives half its operating revenues from property taxes.

Ashibetsu is not the only municipality that defines property values any way it wants to. Asahi reports that there are many lawsuits being argued nationwide regarding this issue. A golf course in Shimane Prefecture is suing the local government for over-assessing the value of its land. Though the course is still technically in business, it can’t afford to be open because patronage has dropped too much, but the local government has never reassessed the value of the land. The first trial ended with the court finding in favor of the golf course, but various appeals have sent the case all the way to the Supreme Court, who has yet to rule on it.