During the New Years break our house-hunting ambitions flagged a bit, and we started reassessing our priorities: What would happen if we went back to zero? In other words, we thought carefully about building our own house. The last time we did that, almost 20 years ago, we got burned, more because of our own ignorance than due to any concerted effort on the part of the real estate and construction industries. But we know more now and feel that we should at least explore the idea. For instance, we like the small houses built by A1 and they’re pretty cheap, so we could talk to them about our needs and what they can do to satisfy them. But first we would need to find a piece of land.

Though land prices have fallen since the bubble period, it’s still pretty expensive anywhere within, say, two hours of Tokyo. We’re not commuters so we don’t need to be on a main train line, but we do need to be on some train line. We started our search at the bottom, in two areas not that far from where we live and which we’ve come to know through our house-hunting inspections in the past year-and-a-half: northern Chiba along the Narita line, and south of where we live now, along the Keisei Hon-sen through Sakura. As it turned out there were more than a few very cheap properties that were still large enough for our purposes. By cheap, we’re talking ¥5 million or less, and for that price you definitely have to give up something. In some cases, the plot isn’t properly developed, meaning it may not have sewage or gas lines extended into the property itself. Also, cheap plots tend to be holdouts in sub-divisions that are already mostly filled, meaning no one wants them but the developer is desperate. The lot might be stuck in a dark corner of the neighborhood or have problems with access, which isn’t a concern for us because we don’t have a car, but sunlight is one of our priorities. Then there’s the state of the lot itself. Some appear to require a great deal of “preparation” before they could have a house constructed on them, and we have no idea how much that would cost.

We inspected four plots in Sakura without the aid of realtors. We simply found the properties on the web and and called the agents for the addresses. The first two lots were not far from the Usui house we have been looking at, and both were located at higher elevations, which is what we want, though they also happened to have addresses with the name Usui-da (Usui-den?), which makes it sound like they should be near rice paddies. The first plot was in a very nice old neighborhood where the houses weren’t so tightly packed together and which had a commanding view of Inba-numa to the north. However, the land itself was located at the end of a narrow private road and surrounded by dense bamboo growth to the east, a tall two-story house to the north, and a retaining wall to the south. No sunlight there, thus explaining the ¥3.9 million price tag, which we had already been told was marked down from ¥5.9 million. 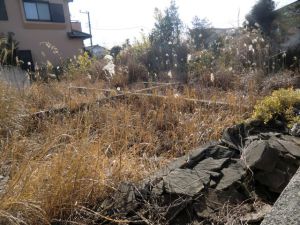 The second lot was in a more densely populated subdivision, but on the edge of a ridge with a nice view of rice fields to the east. Considering how big the land was–239 square meters–¥5 million sounded like a steal…until we saw it. Apparently, a house used to stand on this lot, and the fact that it didn’t any more should have impressed us. Almost any house in Japan that’s over 25 years old has no value, so if you buy one you’re essentially paying only for the land, which means you have to pay extra to have the house torn down if it’s only the land you want. So it was nice of whoever used to live here to have gotten of the structure–but they left the foundation. Also, the realtor had told us on the phone that gas lines and sewage (gessui) only came up to the edge of the property and it would probably cost another ¥700,000 to have them extended. Obviously, even before construction could begin a lot of expense would be involved. In any case, the view in all directions wasn’t that great. 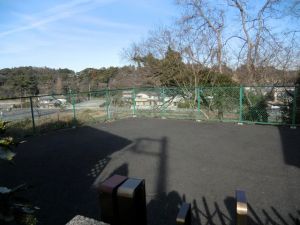 The third property was near Keisei Sakura station; only six minutes away, in fact, which made us wonder how it could only be ¥3 million. We had some difficulty getting an address from the realtor, who was located in Nakano, Tokyo. The agent in charge was a woman whose handy bio on the company’s home page revealed that her hobby was “growing bananas.” In any case, it took several calls before the banana lady was free enough to fax us a totally useless map and a partial address, but we’ve been through this enough to know how to use such sketchy information, and were able to locate the lot, which happened to be at the top of a bluff overlooking the railroad tracks. At first, we mistook another vacant lot for the one we were looking for, but after looking it over we concluded it was too large to be that one and walked up a little farther and found it at the end of another narrow private drive. Interestingly, it was completely covered in asphalt. It had an amazing view to the north and the west, but houses in close proximity to the south and the east. We understood why no one had scooped up this prize yet: once a house, even a very small one, was built on the lot there would be no room for a parking space. The lot was about 100 square meters, and the occupancy rate was 60%, which means the footprint of the house couldn’t be more than 60 square meters, which isn’t bad since the capacity rate was 200%, but it doesn’t leave room for much else. And how much would it cost to rip up all that asphalt?

The last lot was at the bottom of the bluff, right across a narrow street from the train tracks. Maybe it was the noise from the Keisei Line; maybe it was the retaining wall on the south of the property holding up a small parking lot; maybe it was the puny 79 square meters you got for your money; but in any case it only cost ¥1.9 million, and by the looks of the weeds and the weathering on the huge for sale sign it appeared this lot had been begging for a buyer for quite some times. It would have to beg a bit longer. For less than ¥5 million, you get what you pay for.