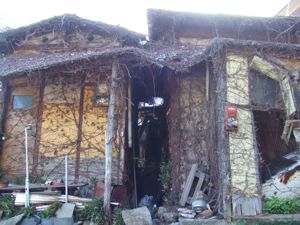 In an otherwise unexceptional news item about local governments fixing up abandoned properties in order to rent them out cheap and thus attract newcomers to their dwindling communities, this little nugget of economic foreboding was revealed. Although it’s no mystery that vacant homes are on the rise in Japan, the number was specified in a new survey conducted by the Ministry of Internal Affairs and Communications. In 2009, the ministry found, 7.56 million residences in Japan were unoccupied, accounting for 13 percent of all houses and apartments in Japan. That’s a 15 percent increase since 2004. In some prefectures, the vacancy rate is as much as 20 percent, and the ministry predicts that the number will only rise, which you don’t need to be a Nostradamus to figure out. The population is dropping and there’s just no market for old homes anyway because the government only cares about building new homes and condominiums.