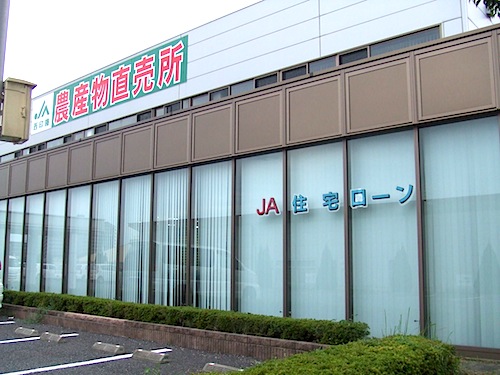 Since the local branch of JA Bank is close to where we live, we decided to drop in and see what they could offer before setting out for Tsukuba and our rendezvous with SBI Mortgage. Though we had been virtually assured by N that SBI would lend us the money we needed, we wondered if we could get better terms at JA. Perhaps more significantly, we wanted to keep matters close to home. If we were going to borrow money we preferred it be from someone we could interact with whenever we needed to. We also liked the idea of doing business with people in our own community, especially now that we were thinking of planting roots in that community. SBI Mortgage, by virtue of its “money store” image, seemed more like a chain outlet.

The loan officer who met with us at JA was an efficient, overly friendly man in his late 30s. He listened patiently to our singular tale, a streamlined version of the one we related in our last post. When we pretended to be interested in Tama Home’s products two years ago we were honest about our income because we felt it was a good way of exiting the conversation after getting the information we sought, but the salesman had called our bluff (in a manner of speaking; there was no reason to think he didn’t believe we were sincere) by telling us that our budget was unrealistic, even though Tama Home did sell houses that were less than ¥10 million. As for our ¥2 million annual salary issue, he said it was not a problem, which is why he suggested JA Bank, and that’s why we were here.

Though we had brought along tax documents we weren’t quite expecting to make a formal application. We simply wanted to know what our chances were of getting a loan and what the terms would be if approved. To the JA loan officer it was pointless to explain what could happen; better to just apply and see how things turned out. In fact, he made copies of every document we had with us. He was careful to stress what we would eventually come to understand was the most important aspect of getting a home loan, which is that the lending institution needs to see what it was you were buying. They were not interested in hypotheticals. Ideally, we had thought that if you were going to borrow money, you should find out what the bank was willing to lend you, but that’s not how it works. You had to bring them something. It was as central to their decision as your income or credit history. END_OF_DOCUMENT_TOKEN_TO_BE_REPLACED

New housing will always be a prime economic mover in Japan even as the population drops, so the sector needs all the help it can get. Right now new housing is seeing a boost due to the expected consumption tax increase next year. Buyers are trying to make deals before the tax goes into effect, but what happens afterwards? Real estate and housing companies are worried there will be an even bigger slump once that happens, so the government says it plans to allow financing rates of up to 100 percent for long-term fixed rate loans, or so-called Flat 35 mortgages. That means borrowers who qualify don’t have to put any money down. At present, a borrower has to put at least 10 percent down.

This happened once before. In 2009, when the recession was at its worst, the government allowed no-down-payment loans but it was a temporary measure and ended in March 2012. Of course, some people are worried since such loans are considered risky, so as part of the proposal screening of applicants will be made stricter, though the details have yet to be worked out. In addition, some of the Liberal Democratic Party’s ruling coalition partners want to provide handouts of up to ¥300,000 to people who are approved for housing loans but whose income is less than ¥5.1 million a year. This handout would offset the effect of the consumption tax increase. END_OF_DOCUMENT_TOKEN_TO_BE_REPLACED