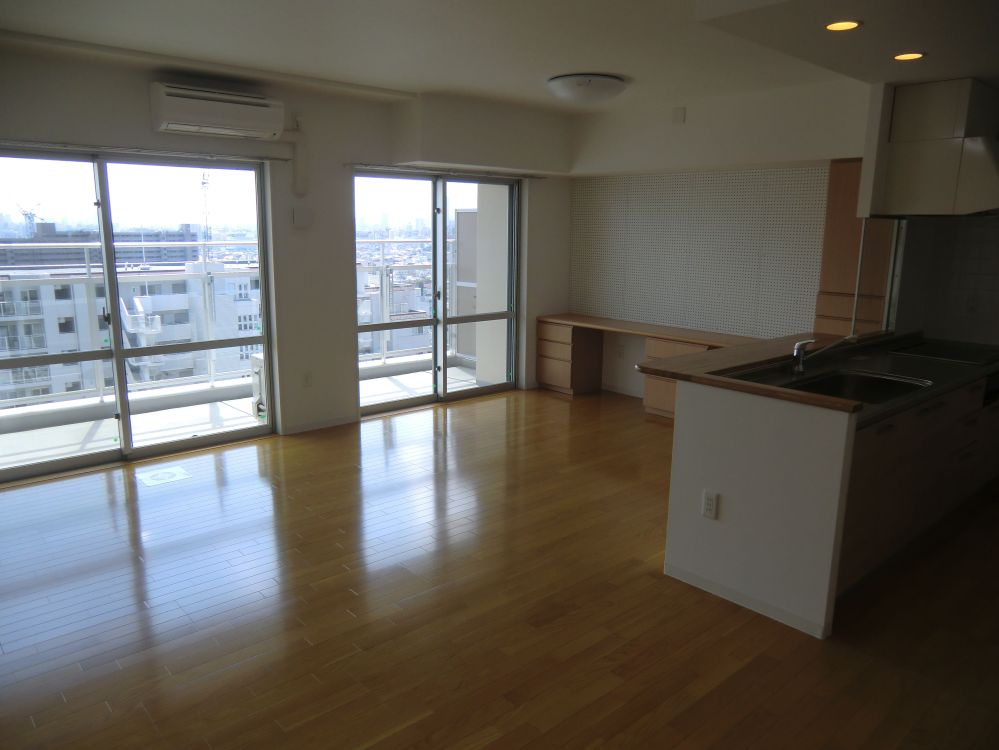 We took in the new Heart Island Shinden public housing complex a few weeks ago, which is scheduled to start accepting residents sometime in November. Heart Island Shinden is essentially a strip of land between the Arakawa and Sumida Rivers where they come the closest to each other, and though the closest stations are Oji on the Keihin Tohoku Line and Oji Shinya on the Namboku subway line, both of which are in Kita Ward, Heart Island Shinden is in Adachi Ward. It’s more than a 20-minute walk from either station, even if you move fast, so most people take a bus.

Even before the new complex was built, the area was already home to a number of apartment complexes, both private and public. In fact, it’s a veritable forest of mini-skyscrapers. The one we visited is operated by UR (Urban Renaissance), the main semi-public housing corporation in Japan. We live in a UR building that was completed in 2000, and in the decade since then we’ve often visited newer UR buildings to see what improvements they’ve made. What we’ve found is that which each new project ameninites get added but the basic problem with Japanese apartment living–namely, impractical layouts–remains, due to a habit of prioritizing 3-dimensional efficiency over baseic livability. In other words, floor plans are dictated by box-like patterns that allow developers to maximize space and fit as many units as possible given the land area and height of the building. The two wings of the HIS complex are 9 stories and 14 stories, which is about the same as the other buildings in the area, thus indicating that there is a height limit. (The building we live in is 38 stories)

Over the year, we’ve found that UR has finally started thinking about storage space, and one of the positive changes in the HIS complex is that there’s plenty of it–walk-in closets, in fact, can be found in almost every unit, regardless of the size. Also, the larger units, those over 90 square meters, tended to do the Western thing and place the rooms off of a central hallway, thus making the rooms more private. The smaller units still follow the usual Japanese “kamaboko” (fish cake) style of dividing a rectangle into smaller rectangles. Perhaps this seems unavoidalbe given the size, but we happen to live in a 78 square meter apartment with three bedrooms that use the Western hallway method, so it is possible. We tend to think of our apartment as being an exception, which is probably why we’re still here.

Other problems that UR has not solved are electrical outlets in inconvenient locations and extra rooms that jut out into living rooms and delineated by sliding doors. Usually these rooms are “Japanese” in that they have tatami floors, but the ones at HIS didn’t. It gave the structure of the apartment the air of an afterthought.

But the main reason why I wouldn’t want to live in Heart Island Shinden is the other mandatory feature of Japanese apartments: the southern exposure. All the units face either south, west, or east, but Arakawa River is to the north. All the units face other apartment buildings and none face the river, even though the upper floors would get a fine view of it.

In any event, we were surprised to find that applications weren’t that high since the rents were quite reasonable, even for the very large units. This was certainly owing to the distance from the nearest stations, but usually UR fill up quickly because of the ease of moving in (no guarantors or key money). The most popular units were at the extremes, the larger apartments and the smallest ones, with between 3 and 10 applications for each one. The vast majority of the units in the mid-range so far had no takers, and the day we visited was only two days before public inspections were to end.