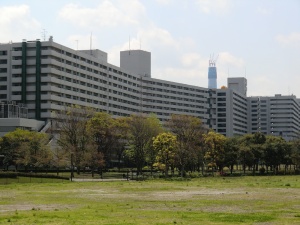 There are two types of public housing available in Japan. A national public corporation called UR runs semi-public housing whose rents are pegged to property values. Meanwhile local governments at the prefectural and municipal levels provide housing for low-income families and individuals. Last week, the Asahi Shimbun surveyed this latter category among Japan’s 47 prefectures and 19 major cities. The newspaper found that 1/3 of these entities planned to reduce the number of units of low-income housing in the future.

In fact, the only two local governments who said they planned to increase low-income public housing was the prefecture of Okinawa and the city of Sagamihara in Kanagawa Prefecture. Everyone else said they either would keep the number they already have, or had not made any plans at all.

The governments who said they would decrease public housing stated as their main reason the declining population. The second most common reason was difficulty in securing funds for maintenance of existing housing. Two prefectures said they were planning on rebuilding their housing facilities, since the bulk of low-income public apartments were built in the 60s and 70s. When they carry out the reconstruction work, they will probably reduce the number of units per building. Another reason that wasn’t mentioned as often but certainly had a significant impact is the fact that subsidies for public housing from the central government have dropped by 40 percent in the past ten years.

What’s alarming about these findings is that demand for low-income public housing has not decreased. If anything, due to the lingering recession and the uncertain employment situation, demand is probably greater than ever. Nationwide, there is an average of 9.9 applications for every unit of low-income public housing. However, instead of promoting more construction or conversion, the central government merely fools around with numbers. In order to reduce this ratio cosmetically, the central government, which determines the qualification standards for low-income public housing throughout Japan, simply sets the household income threshold lower. In April 2009 they lowered the upper limit from ¥200,000 a month to ¥158,000 a month, thus not only disqualifying a large portion of people who were trying to get into public housing, but making it possible for local governments to kick out residents who make more than ¥158,000 a month.

What this does is effectively make public housing a ghetto for single elderly people, since most families, even poor ones, have to make more than ¥158,000 a month to even survive. This trend becomes even more maddening when you take into consideration the fact that a lot of regular public housing is vacant because local governments refuse to lower rents. The assembly of Arakawa Ward, where we live, has asked the Tokyo municipal government to lower rents by 10 percent on the public apartments it runs in the ward because the vacancy rate is increasing by the month. For some reason the assembly doesn’t ask the prefecture to offer these units to low-income families. Maybe they just want them to move to another ward.