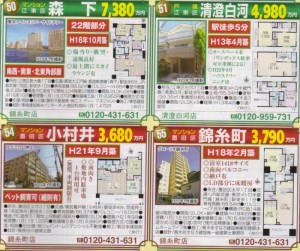 The Democratic Party of Japan has disappointed many of its supporters since coming to power a year-and-a-half ago. Some of the party’s most progressive proposals have either been shelved or abandoned. One of the less discussed promises has to do with chukai tesuryo, or “intermediary fees” that are charged by realtors when they broker a sale of a house by the owner.

In its INDEX 2009 statement of policy, the DPJ pledged to move away from home ownership as the primary housing policy goal and boost rights for renters, whom previous Liberal Democratic Party governments all but ignored. In addition, the DPJ said it would limit realtors to charging intermediary fees to only one of the parties in a housing sale. According to the law, when a previously occupied home is sold, the realtor can charge a fee equal to no more than 3 percent of the price of the house + ¥60,000 + consumption tax. For a ¥25 million house or condo, the fee would be ¥855,000. What bothered the DPJ is that the realtor can charge this fee to both the seller and the buyer, meaning for that ¥25 million home it can clear a cool ¥1,710,000. The party pledged to make it a law that the realtor can only charge this fee to one or the other party but not both. (Note: there are no fees when the realtor itself is selling a house or when the house is new and being sold by a developer.)

As with the pledge to support renters, the promise to control fees remains in limbo, and it’s not clear what exactly the DPJ hopes to bring about by limiting the fee to one party in a home sale. For sure, the extraneous fees that come with buying a home can be intimidating: title registration, bank fees for loans, loan insurance. In the end, a buyer pays anywhere between 5 and 10 percent of the price of the property in fees. In any case, no realtor charges less than the 3 percent ceiling, which means that the whole industry acts like a cartel. There’s no competition, though theoretically there could be. Most properties list with multiple real estate companies, so it’s possible a prospective buyer could play one against the other: Give me a deal on the tesuryo and I’ll work with you instead of the other guy.