Japanese apartment complexes often have pretentious, unwieldy names that are meant to add a touch of cosmopolitanism to otherwise nondescript residences; something you might expect from an industry that managed to convince people to adopt the English word “mansion” for condominiums. Earlier this week when we went over to Ogikubo in Tokyo’s western Suginami Ward to inspect the new UR apartments that are starting to accept applications for tenants I couldn’t quite make out the name, which sounded French, and I neglected to write down the romaji iteration after we got there, though I do remember is started with a “C” and had an “X” and some consecutive combination of “E” and “I.” Maybe a “U,” too; but whatever it was I couldn’t pronounce it on sight. Having returned home I see it rendered in katakana as シャレール. So let’s just drop the whole thing and call them the Ogikubo UR apartments.

Adjacent “danchi” destined to be torn down

The UR complex of sixteen 4-story buildings is on land formerly occupied by another public housing complex, and surrounding the new buildings on two sides are remnants of that complex–delapidated structures that appear to be in the process of losing their tenants through attrition. One UR person on site said that, from what she understood, those buildings would eventually be torn down, but UR was not the developer, some “private real estate company” was, but she assured us, believing that we were concerned, that whatever replaced the buildings wouldn’t be higher than the UR buildings. The area has height restrictions.

If the naming pretense is in any way justifiable, it’s because the neighborhood is pretty pretentious, too. The old public housing units are super-conspicuous in this neighborhood, which is decidedly upscale. The 15-minute walk from JR Ogikubo Station takes you past some ritzy properties: huge pseudo-mansions with stone lions and phony Spanish stucco appointments. Even before arriving at UR Ogikubo I assumed the apartments would be out of our league price-wise simply because they were surrounded by this. And I was right. We pay ¥160,000 for a UR apartment in Senju (not including management fee) for 78 square meters. The cheapest thing we saw in that size category in Ogikubo was ¥183,000, which isn’t a whole lot more but there were few that size and they were dark and cramped. The vast majority of units were either much smaller or much bigger. It was an odd variation that was meant to appeal to either single people with a lot of money or families with at least two children and a lot of money; demographics, I would think, that are on the decline. 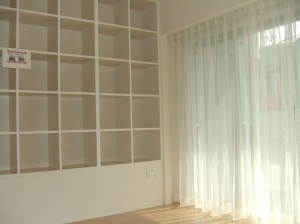 Still, they’re good apartments on the whole; and the enivironment is better than the one surrounding the new UR apartments in Akabane. The complexes are arranged around courtyards with gardens rather than parking lots, and the units that face west have a nice view of a river. It’s also an extremely quiet neighborhood. The building themselves are modernist concrete blocks, but in a pleasantly conforming sort of way: the whole complex has the feel of a high-tech research center in what I suppose is meant to be a European style (thus the unpronounceable name?). It’s clearly out of the typical UR aesthetic mold, which is totally functional-looking. This at least looks like someone with imagination was involved.

The style extends to the individual apartments, which are more open and thus brighter than most UR product. The windows, all double-glazed, often go from floor to ceiling or wrap around corners; and units on the outer perimeter of the complex tend to be oriented in terms or width rather than depth, meaning that the rooms in those units are lined up along the outer perimeter rather than collected in geometrical boxes. This is a significant improvement, since for the most part UR apartments (and Japanese apartments in general) are arranged to maximize available space for the developer, not the tenant/buyer. Though UR Ogikubo had its share of boxy, dark, and somewhat incongruous layouts, there was an impressive number of units that seemed to put a premium on livability. Unfortunately, these units tended to be the more expensive ones. On the downside, the veneer flooring is even cheaper looking than usual and while UR is getting smart and using more sliding doors, they’re invariably flimsy in look and feel.

One of the better kitchens

The amenities are impressive–extensive floor heating, broadband LAN in every room, IH stove tops–but UR has always been at the vanguard for such things in Japan and I didn’t notice anything that I hadn’t seen last month in Akabane. What was perhaps most interesting was the way they were planning to rent them out. Public apartments tend to attract more potential renters than there are units to accommodate them, owing to slightly cheaper rents and easy terms (no guarantors, not “gift money,” not contract renewal or realtor fees), but lately UR, like all housing-related companies, have had to hustle. Normally, when a new complex opens up, the hopeful applicant puts his or her name in for a particular style of apartment. If there are, say, ten units with that particular layout, then ten people are chosen (those who already live in the area or already live in a UR facility receive some priority) and assigned to individual units. However, you could not apply for a specific unit unless there was only one in a particular style. UR Ogikubo, however, is accepting applications for specific apartments, which would seem to indicate they’re a little more desperate. When we looked at the chart showing applications so far, there were only a handful of units or styles that had more than two applicants so far. But it’s still early, I suppose.