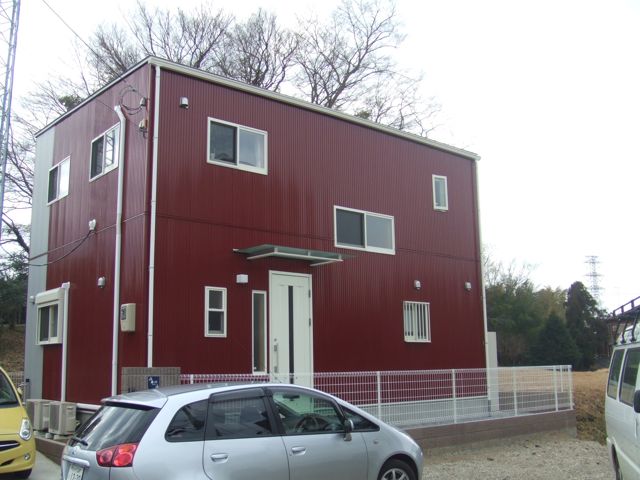 Yesterday we inspected a house built by A-1 near Monoi Station on the Sobu line in Chiba Prefecture. A-1 was the subject of one of the Japan Times’ entrepreneur columns a few weeks ago and the writeup was very intriguing in that here was basically a housing design company that tried to keep costs down by overseeing construction. Their home page proved to be even more intriguing in that the designs were simple and practical, the materials attractive (wood interiors, in particular), and the prices well within almost anyone’s budget. One of the ways they keep their prices down is eschewing expensive promotion. For instance, they don’t build model homes but rather pay people who are now living in A-1 homes a small fee to show prospective buyers around their dwellings. That’s what we did, in the company of an A-1 salesman. 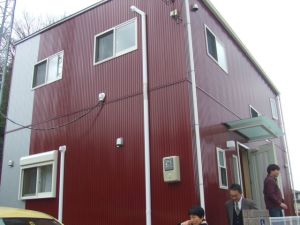 The couple, who seemed to be in their late 30s or early 40s, were extremely enthusiastic about their house and showing it off to us. They had previously owned a house in the vicinity but had been trying to sell it for several years, going so far as to spend money on improvements to make it more attractive. It didn’t work until the big earthquake last March, when it seems their house became appealing to someone who had lost his and needed a replacement quickly. We’re not exactly sure if this qualifies as a silver lining of the tragedy or incredible luck, but in any case within the space of nine months they not only sold their own house but contracted with A-1 and had a new one built. They moved in in December, and the excitement of living in a new place had yet to wear off. They were also fortunate with their choice of land. Though it was in a standard (and, from the looks of it, brand new) subdivision, their plot was in a corner, overlooking sloping farmland to the east and sparse woods to the south, so there was no feeling of being surrounded by oppressive suburban clutter.

The house stood out: a wine-red two-story box in the middle of the usual pseudo-contempo, big-corporation prefabs. The practical aspect was noticeable as soon as you walked in the door. The genkan was quite small, which seemed an improvement over corporate housing, which usually wasted a lot of space on big genkans. Instead, a closed space to the left of the genkan was used to store outdoor paraphernalia, like garden tools and automotive care products, thus obviating the need for some kind of separate storage facility, which is usually an eyesore. 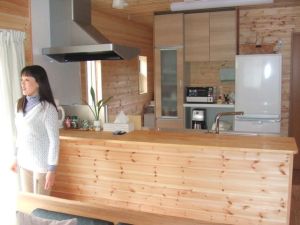 The interior was surprising: wood everywhere, meaning the walls, floors, and even ceilings, and it was natural wood, not veneer. According to the salesman, real wood is not as expensive as most people think since whatever extra cost the wood itself may entail is absorbed by having the workmanship done by one person; meaning you just hire one carpenter for the walls, floors, and ceilings rather than three. In any case it was more impressive than the promotional materials, which tend to make the interiors look like “log houses.” The trouble with log houses is that they were originally designed as vacation homes and tend to be, design-wise, impractical for daily living. Of course, it has nothing to do with the all-wood factor; it’s just a point of similarity that gives rise to a certain prejudice. A-1’s use of space in this instance was impressive. The living-dining-kitchen area was small but sunny, and there was a little nook in the back of the kitchen where the wife had set up her own office. The nook was ostensibly a pantry but there was enough room for a desk.

Upstairs the layout was even better: a master bedroom with a walk-in closet and two smaller bedrooms, one of which the husband used as his office (he’s an insurance salesman, but his hobby is shortwave radio–the parking space was occupied by a very tall radio tower) and the other for whenever they decided to have a baby, though at the moment it was used for drying clothes. The windows were large, and the wood was, again, everywhere. The couple had decided to do without doors on the closet, either sliding or accordion, and installed roll blinds, which apparently saved them a lot of money and was much more attractive. 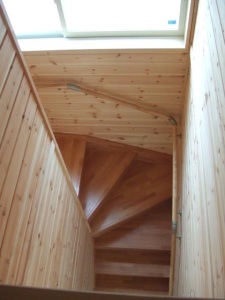 We mentioned that the feel of the place was similar to that of Mujirushi’s pre-designed houses, which we liked. They said that they had looked at Mujirushi homes initially and really wanted one but balked at the prices, which start at ¥16 million. We couldn’t extract what they paid for the A-1 house, though they did reveal that the land cost them ¥5 million. Because they had splurged on so many options (custom bathroom sink, custom kitchen cabinets and countertop, different-sized windown in certain rooms, a wooden deck), we assume that the price was about ¥5-6 million more than the base price for this particular design.

When we left we were quite high from contact with a property that was attractive and affordable. We went to a family restaurant for coffee with the salesman, who hadn’t spoken much during the tour; not because he wasn’t doing his job, but rather because the couple were so enthusiastic about their purchase that you couldn’t shut them up. It’s a great promotional strategy, because we were already sold on the house and on A-1’s particular business phiolosophy even before we sat down to talk details, but, again, details are what we are all about, as demonstrated by this blog, and once we started explaining what we were looking for, he seemed surprised. “You really know a lot,” he said. 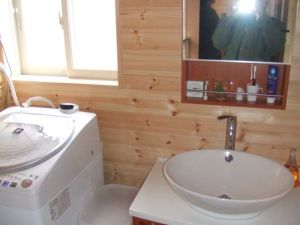 That’s debatable, but over the years we’ve asked questions that most potential buyers don’t ask. Thankfully, he was open to discussion, unlike a lot of salesman who stonewall. Since A-1 started out as a design company, it was how they made their money, and though the base price of the houses, which included construction, seemed cheap by any standard, costs added up with any changes to the fundamental designs. For instance, we were most interested in a one-story, two-bedroom design that cost about ¥9.5 million. However, with each small design adjustment, the price went up considerably; and the standard fixtures weren’t very attractive, which meant we would have had to pay for options. After some back-and-forth he asked us what we were willing to pay and we said ¥15 million. “Including land?” he asked. Including land. The helpful facade dropped a bit. Obviously, even for A-1 that was going to be difficult.

Our own enthusiasm faded once we started talking about structural details, in particular the exterior. The wine-red siding (also available in dark blue) was made of something called galvanium, which he admitted was inexpensive and not very strong. If you struck it with any force, the corrugated surface would dent; but the coating, he assured us, was tough, “just like the finish on an automobile.” However, later we looked up galvanium siding and read that it rusted quite easily in areas where there was not coating, like around molding and windows, and had to be recoated every three years or so. More significantly, the roof was also galvanium, and sloped rather than peaked. We’ve often heard that the roof is the most expensive part of building a house. The salesman assured us that insulation would prevent the metal roof from making the house too hot in the summer, but, again, we read that galvanium roofs could get quite hot. And the reason the roof wasn’t peaked was to save money, since a peaked roof involved more surface area. 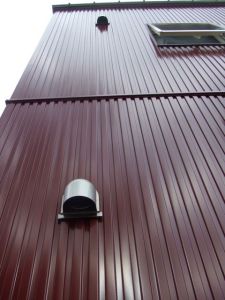 But while our enthusiasm had been tempered during the discussion, we still found A-1 to be one of the more straightforward housing companies we’d dealt with. To really get a good idea of the quality of their product, we would have to talk to somebody who had lived in one of their homes for a longer period of time, and asked the salesman if he himself lived in an A-1 home. Actually, he lived in a Sekisui Heim structure, in Ibaraki Prefecture, which had been considerably damaged by the earthquake (“it tilts about 1 degree”). In fact, he was so traumatized by the experience he moved for a short time with his family to Canada, but came back by himself several months ago. In Canada, however, he hooked up with a mobile home company and now, in addition to his work with A-1, was selling their prefab structures in Japan; or, at least, trying to. They would have been the perfect thing for evacuees in the disaster area, except that the government pretty much ignored foreign housing companies in favor of domestic housing suppliers, which are much more expensive. But that’s an entirely different story.