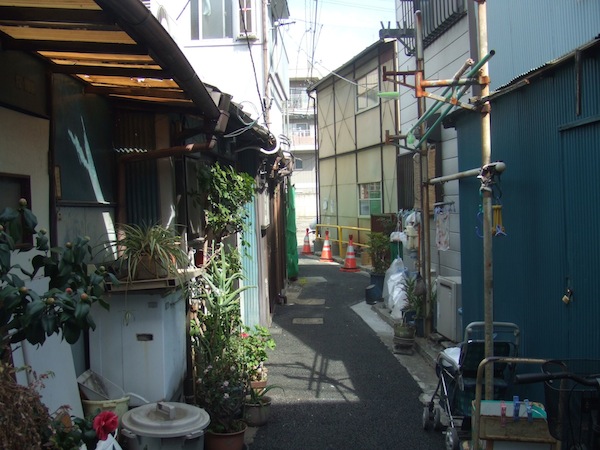 Last Sunday morning at about 7 o’clock, a fire broke out at the Rose House Higashi apartment building in the Okubo section of Shinjuku, Tokyo. More than half of the two-story structure was destroyed. Four residents died and two remain in critical condition. Of the 26 units in the building, 22 were occupied by 23 residents. That means one unit had two people, which is sort of remarkable since each apartment is only 4.5 tatami mats in size, or about 8 square meters.

Rose House is fifty years old. Each room has a cold water faucet and a gas burner. The toilets are communal. There is no bath, which is characteristic of these kind of wooden apartment buildings. Rents were between ¥51,000 and ¥53,000 a month, which is cheap for Shinjuku but quite expensive for this kind of residence. For ¥10,000 more you can probably find a six-mat apartment not far away with its own private bathroom, but as media have reported 17 of Rose House’s residents were on welfare, and most of them were “very old.” The Shinjuku welfare office told reporters that they did not “recommend” Rose House to any of the people they administer, but it’s common for welfare recipients to “live in the same building.” That’s because their incomes are extremely limited and most landlords will not rent to welfare recipients. As it happens, welfare recipients in Tokyo tend to receive a higher housing allowance than people in other cities in Japan, the maximum being ¥53,000. Rose House apparently catered to welfare cases, which makes sense. Landlords usually can’t demand that much money for such old, cramped apartments, even in Shinjuku, and public housing is usually off-limits to single people; but since welfare recipients don’t have a lot of choices the Rose House landlord could ask them to pay that much. Also, Rose House didn’t demand a guarantor. Even at less than full capacity the place makes more than a million yen a month.

So far the police have not isolated the cause of the fire. Some media initially suspected it had something to do with “old wiring,” since there was a small electrical fire in one of the apartments several months ago, but the Asahi Shimbun has reported that theory has been discounted. Though the building was situated on the edge of a parking lot, Rose House is what is called a saikenchikufuka, a structure that “can’t be rebuilt” because it was erected in the middle of block, thus making it very difficult for firemen to gain access. Nobody will be moving back in, which means the surviving residents now have to find some other hovel to accept them.