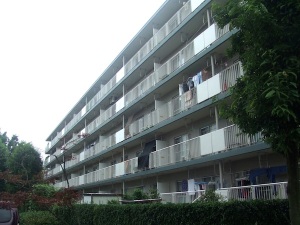 We often go out in the field to do research, but it’s always a two-pronged activity. On the one hand we study the housing situation and the market in an up close and personal manner. On the other hand, we’re still thinking about buying property ourselves someday, and though after more than fifteen years of searching off-and-on we haven’t bought anything, it doesn’t mean we never will. Still, the longer this goes on and the more we learn, the more frustrated we become, especially as our income situation remains precarious owing to the ongoing recession. Having a permanent abode that we can’t be kicked out of, regardless of our job circumstances, is a vital consideration, but looking at what we can afford we invariably fall into a funk wondering why we have to settle for such places. Inevitably, you prevaricate: This may be livable.

Our latest subject is old danchi/kodan for sale, which have become semi-popular due to media coverage of “danchi moe,” or fans of old public housing. We’ve written before about enterprising people who’ve bought old apartments in buildings constructed during the 50s-70s and remodeled them as attractive modern spaces, which they often sell for a profit. Because they only cost a few million yen to buy and a few million yen to fix up, they can be had quite cheap in the end, but most of the units that have been covered on TV and in magazines are small; fine for a single person but still a bit cramped for a couple and certainly not big enough for a family, though in all likelihood they were occupied by a family when they were new.

When you get out of the main cities, these danchi and kodan get bigger and even cheaper. And in most cases they’re also newer, which means more amenities. However, they still look like danchi, meaning they’re usually contained in dull concrete buildings of three to five stories without elevators. The fact that they are designed with these parameters in mind means that the apartment layouts tend to be more sensible than those in newer buildings. The classic kodan design has a staircase and apartment entrances on each side of the landings, which means you usually enter at ninety degrees to the length of the apartment. That allows for windows on both ends of the apartment, which means there is not only more sunlight, but cross-ventilation, an important consideration until the 1980s, when air conditioning started to become a fixture of apartment life. It also means the rooms are more practically positioned, unlike modern apartments where the entrances open up to a common outside hallway or light well, which means all the light and air comes from only one direction. In order to maximize space for commercial purposes, the rooms are basically carved out of a boxy shape, thus creating what is often referred to as “kamaboko” living spaces. Kamaboko are those rectangular fish paste loaves that you divide into smaller rectangular pieces.

So discounting the unappetizing exteriors, older danchi, especially when they’ve been fixed up, can be quite desirable, and in this spirit we called a few real estate agents and had them show us some in northern Chiba. 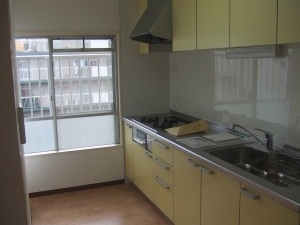 Accompanied by a young male real estate agent we inspected two kodan in different but almost neighboring housing complexes. The first one, vacant, was built in the late 1980s and was going for about ¥10 million for 87 square meters. It had been remodeled with spongey sound-proof “flooring” (fake wood grain) and a better grade of white wallpaper, but the kitchen was quite large and had its own window. Cross ventilation was good owing to the fact that the apartment was situated in line with the building orientation, so air could travel through the apartment in all the rooms. One drawback for us was the ceilings, which were, in the fashion of the time it was built, lower than what we were used to, and while every room had a window or sliding doors to the outside, the light wasn’t as bright as you might think. Still, for the price it was roomy and well appointed.

The second place we visited was built around the same time and while it was two square meters larger it was also about a million yen cheaper. The sellers were still living there, a middle aged woman and her daughter, so we got the rare chance of seeing one of these kodan actually being used. The difference is instructive. In the previous apartment, the fact that is was completely empty enhanced the feeling of roominess, while this place seemed cramped. Of course, many Japanese people, especially those living in older apartments, live cramped lifestyles by necessity, but both apartments had, uncharacteristically for their age, a lot of storage space. The cramped feeling was due not so much to the amount of stuff the occupants owned, but to the lower ceilings and slightly smaller windows.

Throughout our inspection the real estate agent was courteous but distant. He’d been through this ritual before and as soon as he saw us obviously pegged us as non-starters. This may explain his defensive and abrupt tone when we started asking him later about the general market for such properties in the area. We mentioned that kodan and danchi in this part of Chiba seemed cheaper than ones in other areas, even those farther from Tokyo. He disagreed without elaborating and also refuted our supposition that the lower price may have had something to do with demand: There seemed to be a lot of properties on the market. He became slightly agitated, saying that the market was robust and that the area, because of its dense concentration of corporate computer centers that operated round the clock, was an excellent place to “invest.” This assertion shocked us. Any interest we may have had in buying a kodan was purely for living purposes. We entertained no hope of ever selling such a place for more money than we bought it for. In fact, one of the questions we wanted to ask him is what danchi owners did if they couldn’t sell at all, since we assumed it was a common problem given the surplus of vacant properties throughout Japan. He said strongly that that would never happen. There was always a buyer. Besides, you could rent it out easily if you decided not to live there. And if worse came to worse, “my company would buy it from you,” but in general he treated our concerns as not just unfounded but unhinged.

In a sense, his attitude is understandable. As a person whose livelihood depends on the movement of real estate, he can’t acknowledge the perception that some real estate just isn’t moving and probably never will. He may have been right about the danchi situation in this area, but his vehement denial that somewhere down the road a crisis couldn’t happen was also a denial of the prevailing mood. This is the sort of thing we’ve always had to deal with when talking to realtors, most of whom are much more polite and understanding than this guy was but who nevertheless refuse to discuss this coming crisis. Is it our imagination?

We had a better response the next day when we visited another kodan in a neighboring city. Like the kodan we visited the previous day, this one was situated in a crowded complex that, while filled with nicely maintained park areas with lots of trees and shrubs, looked its age. Built in 1981, the structures presumably just made it under the wire to incorporate the nation’s new earthquake-proof building codes. (In all fairness, public housing in Japan, even those buildings put up before 1981, has performed very well in earthquakes) The unit we looked at was not in one of the long main buildings but in a side structure that contained only one central staircase and two apartments per floor, which means each unit had three sides of sunlight instead of two. The unit we looked at was on the fourth floor, meaning the top floor.

The agent this time was a young woman who wore a frightening amount of foundation. She was much more pleasant then the guy we had the day before (it was a different company) and we were able to talk to her freely without drawing a stiff reaction. The apartment itself was partly remodeled, but even bigger than the places we saw the day before, and much sunnier, though it would require a bit more work to make it comfortable. It also cost about ¥10 million though the agent hinted that this was still negotiable. Apparently, the owners put it on the market without improvements at ¥10 million and received absolutely no offers of any promise, so they invested a minimal amount in remodeling the kitchen and changing the wallpaper in most of the rooms. The agent wouldn’t tell us how long it had been on the market altogether, but we assumed it was a long time. We thought it strange, since the layout was attractive. A few million more would have made it quite comfortable, and since it was only five minutes from the train station it could have been considered a steal. 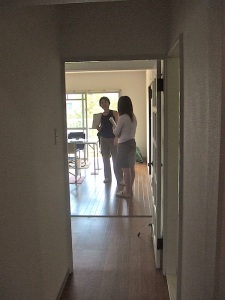 So we again brought up the matter of how marketable any old residence in the area is, regardless of the price. She was not resistant to our questions but hadn’t really seemed to have thought about it, which we found odd but accepted at face value. Emboldened by her receptivity, we put it to her plainly: If we bought this place and, ten years down the line, decided we didn’t want it any more, what were our chances of unloading it, not selling it for more or even selling it for the price we paid for it, but selling it at all? She said she’d ask her colleagues. Her attitude was more pleasing than the other agent’s, but that was only because her aims were different. The previous day’s realtor had given up on us as a potential customer almost immediately. This woman thought we still had possibility, and in the week since we saw her she’s already sent us layouts of other properties within the same area and within our very limited price range. As if to prove our fears, there are a hell of a lot. 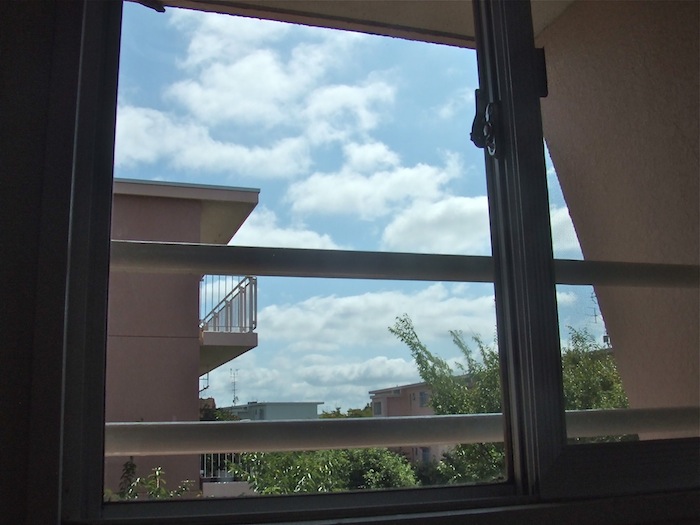